Digital Innovation and the future of search

Today, SEO has never been so important. As businesses and people move increasingly online, brands need to ensure that they have a strong presence in the search results.

Inevitably, this should and most likely will lead to greater investment in SEO. For SEOs, this is, of course, great news. Our work’s growing importance will, if we communicate our work’s worth well, lead to greater influence, dev resources, and ultimately, results.

But SEO is not an industry that stands still.

Today, we’re seeing a new era of digital innovation in SEO products. These aren’t the free tools offered by Ahrefs and the like. Useful though these are for small businesses, the next-gen enterprise products being released today are all about one thing: automation.

Automation will, of course, come in many guises.

Some products will automate tasks, which will, of course, hold some value. But the truly revolutionary products will go one step further. They’ll solve some of the biggest problems in SEO.

Read on as we explore in greater detail these two key trends: the growing strategic importance of SEO, and automation.

Why SEO will become a strategic priority for all businesses

In times gone by, SEO was seen as a cheap, easy way for businesses to drive traffic to their website. This impacted how SEO was prioritized by senior marketers. SEOs’ voices were often not heard, and budgets allocated to SEO were often undercooked.

In many enterprise organizations, this is unfortunately still the case. But if these organizations are going to be successful going forward, such an attitude will have to change. After all, businesses commonly derive more than half of their revenue through organic search. And in today’s digital-first world, this revenue share looks set to increase.

Of course, some of this transformation depends on us as SEOs. A significant part of this will be communicating the value of our work in terms of revenue, rather than visibility. This is a topic we explored in our recent ‘How To Sell The Value of SEO To The C-suite’ whitepaper.

How will this impact the future of search?

First, the importance of SEO will become clearer to marketing leaders as they better understand how the work SEOs do impact conversions and revenue.

Second, this understanding will encourage marketers to give away more of their budget to SEO — in terms of resource, tools, and development time.

Finally, and perhaps most importantly, SEOs will become more influential when it comes to strategic decision making.

The future of search is automated

One of the biggest challenges enterprise SEOs face today is code releases being regularly released to their site without the necessary checks for SEO. This can cause huge problems.

ASOS is an obvious example of this. In 2019, ASOS changed the navigation on its site which subsequently impacted its search engine rankings. ASOS’ profits plunged 87%.

Almost every SEO has a similar example, though usually not at the same scale as ASOS. But the point is this, if ASOS had checked for SEO before those changes were released to their live site, they might not have experienced such a catastrophic loss in revenue.

So why didn’t they? Perhaps because SEO was not even a consideration. Or perhaps their SEO team wasn’t involved within the QA process. It could even have been a case of their SEO team not having the time to check.

Where does Automation come into this?

In an ideal scenario, these tests for SEO would be automated and embedded within their engineering team’s CI/CD pipeline. That way, SEO would always be a consideration, always be a part of the QA process without requiring an SEO to spend hours at a time checking code releases before they’re pushed to a live site.

But is such an ideal achievable? Or is it a future that lays years away? 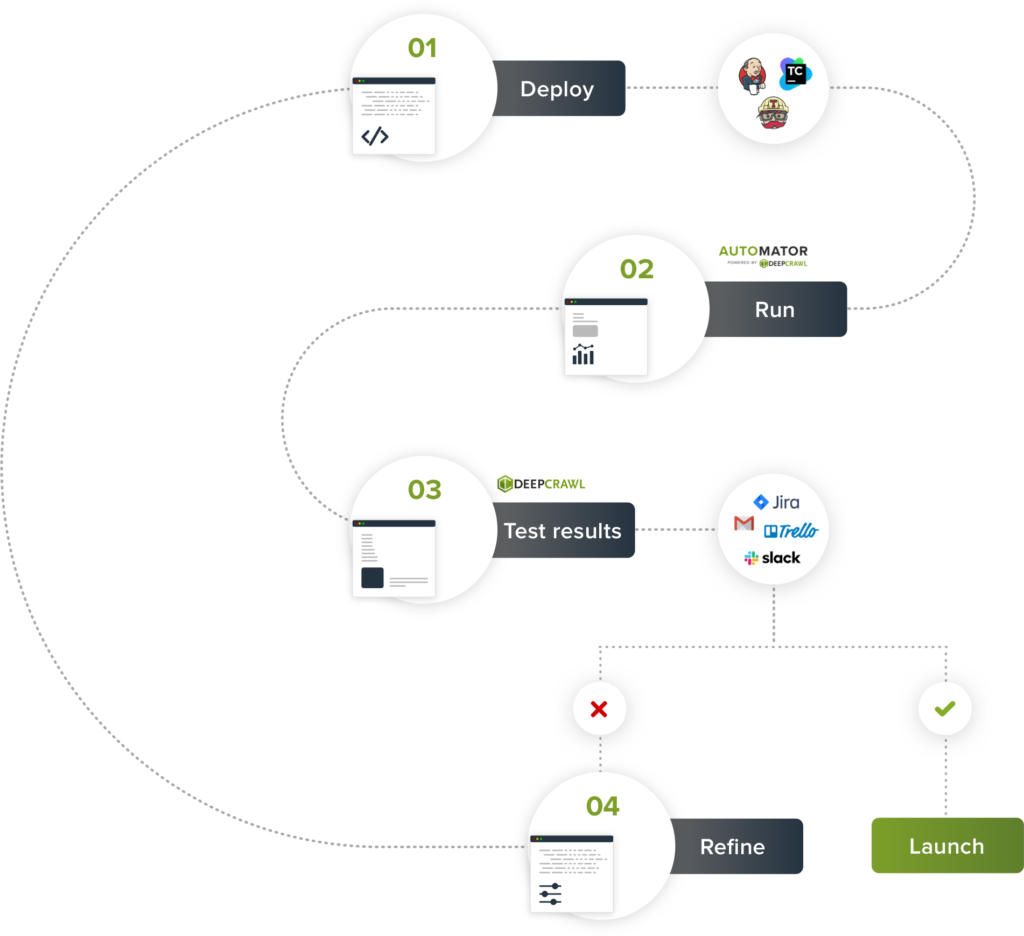 Early adopters, such as heine, have experienced the value of Automator first hand.

In the first few months using Automator, heine ran over 1,000 tests across their eight test suites. 18% of these tests issued a warning and each build had at least one failed test. Without Automator, almost a fifth of code releases would have negatively impacted their performance online.

And heine is, in some respects, an outlier. Across all Automator users, 33% of tests issued a warning. What’s clear is something we all already know: a lot of bad code gets released to sites. With Automator, however, it doesn’t have to.

Common Robots.txt Mistakes and How to Avoid Them

Robots.txt is a critical tool in an SEO’s arsenal, which is used to establish rules that instruct crawlers and robots…

A Guide to URL Design

On the road to URL nirvana, there is a power struggle that must first be overcome. Your URLs must be…

So you know about canonical tags. And you know you should be using them. But, with so much information out…