The Google Webmaster Hangout on 29th October covered App Indexing, with a short presentation and then a Q&A. John Mueller was joined by Mariya and Christoff from the App Indexing team, who covered everything from tips on implementation to iOS requirements, ranking boosts and Search Console support. Here are our notes with times on what was discussed.

Implement universal linking and add the SDK to your app: find out more at the Google Developers guide to App Indexing.

Google is working on a solution called Android App Linking. You will have to use the HTTP scheme and then upload a JSON file to your domain. The JSON file should list the applications that you want to connect to your website, then using the App Indexing API you will be able to tell Google about activities you want to connect with the website.

The main benefits of App Indexing

There is a ranking boost available when you implement App Indexing, and another if you use the App Indexing API. This second ranking boost will be added when Google can see that people like your app and are using it.

With App Indexing there is potential to acquire new app users who don’t already have your app installed (through the install button in search) and to increase traffic to your app (through deep links showing in search results).

The App Indexing API is a core part of App Indexing implementation and will show suggestions for your content within the Google Search app, when users start typing a relevant query.

Assist users anywhere with Now on Tap (Android Marshmallow only)

This is based on App Indexing and requires no extra work once you’ve implemented App Indexing. Android Marshmallow users can see Google Now cards relating to content within emails and other correspondence on their phone. The cards will prompt them to view related content on your app: 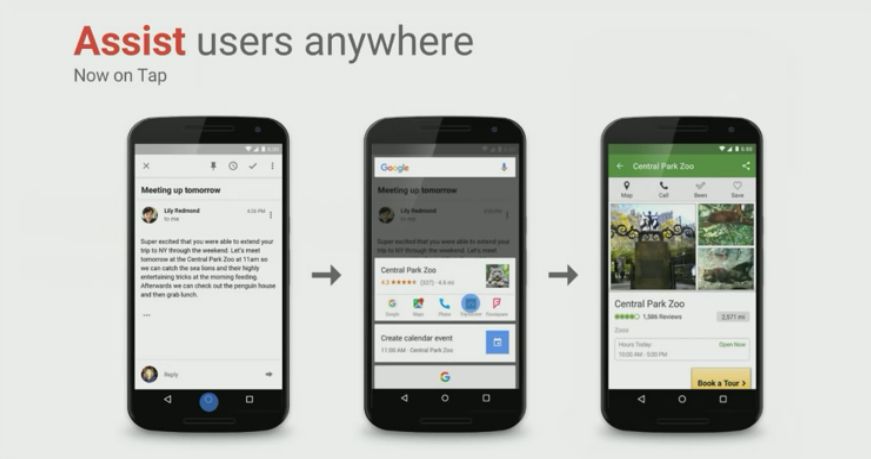 7:30: First step is to make sure your app and website are ready for App Indexing:

HTTP scheme makes it a lot easier for Google to handle your content and Apple also requires it for iOS. It will also help in the future for new feature implementations. Custom scheme will still be supported for the time being, but Google strongly recommends changing to http scheme in the near future. More information is available on the Google Developers App Indexing guide.
Site and app association is key. Once App Indexing has been set up, send an association request either through Google Developer Console or Google Search Console to verify that you are the owner of the site/app or that you have permission from the site/app owner to connect the site with the app. The association request will go to the site owner and they will have to approve it.
Use the App Indexing API for simpler implementation and a ranking boost. Send Google the title of the content and also the start/end time of the viewing process.

Add the app to Search Console and Google will send you a message when your data is available and your app starts receiving impressions in search results.
Google are working on a way to track install button impressions and clicks. A beta test of this functionality will be made available to a select group of webmasters: apply for this and other tests at g.co/SearchConsoleTester.

Google will detect and notify you about several specific issues such as: app doesn’t support a specific intent or if the back button to go back to search results isn’t working properly. These errors will be communicated through Search Console messages.
Issues can be checked through the Fetch as Google for Apps tool: this will show you which APK version was used to test your page and how Google rendered that page, as well as when it was fetched and whether there are any blocked resources that are preventing Google from rendering your content correctly.
Google is also in the process of adding API information, such as the API response.
You can also now fetch as Google with an unreleased APK, so that a new version of an app can be tested before it is released to the public:

18:13: “Can a single app be indexed in multiple languages? How should we handle a multilingual app and what is the primary signal used to select which language is primary? Is it better to focus the indexing to the primary language only?”

Google are working on ways to allow iOS developers to track traffic to their iOS apps. There’s nothing to announce right now but they understand that this is a popular request so they are progressing toward being able to release something.

21:56: “Do iOS app-indexed webpages get evaluation boost as Android ones do?”

iOS 9 pages will get the ranking boost that was announced in February, but they won’t get the additional API boost as they won’t be using the App Indexing API.

23:00: “Any plans to extend the site:, info:, cache: operators (on desktop search) to indexed app pages? [For example] site:android-app://com.gizmos.android/http/gizmos.com/ or a new document type: for site:gizmos.com”

Yes, Google is working on this. There’s nothing to report at the moment but as something becomes available it will be communicated.

No data on iOS apps available in Search Console currently

She did state that iOS apps should be in search results now, although there are no install links for iOS so users will have to have the app installed to see app indexed results.

Determining the value of having an app

39:53: “Is there going to be a way for publishers to determine the value of having an app? Maybe looking at time spent on app for a set of queries vs. time on site for similar queries?”

Mariya said: “We’re actually looking into how App Indexing affects or is beneficial to various apps in a specific vertical. For news, apps provide benefit by [helping users to] load things a lot faster and send push notifications. Let’s say your users subscribe for specific types of news categories [then you can send them just the categories] they are interested in, or [let them know] when a big story breaks or when you have new content… So that certainly helps with re-engagement.

“Again as with most apps we’ve found that it’s usually loyal users who are familiar with your brand and like the content that they see to the extent that they’re interested in installing something on their phone. So I think that it serves to strengthen your existing user base, and then maybe through App Indexing and installs you can be discovered by users who don’t even know that you exist.

“But I agree with you that, as a news publisher, the first thing is to set up clear metrics in terms of what return you’re expecting because it’s a lot of work to develop an app for one or two or even more operating systems. Things like time spent on app and, if you have ads within the app or native ads, how are people interacting with those and how much time and how many times they return to the app versus people who are on the website.”

The requirement is the same for apps and websites: the user should see what they were searching for when they get to the content, without having to go through a paywall screen or other pop-up.

Tristan is a Former Head of Marketing at Deepcrawl.

Notes from the Google Webmaster Hangout on the 7th of July, 2017. Google Recognises Differences Between Synonyms Google folds together…

Notes from the Google Webmaster Hangout on the 12th of June, 2017. Hreflang For Different Languages is Useful for Brand…

Notes from the Google Webmaster Hangout on the 12th of May 2020.   Google Needs to See All Hreflang Variations…