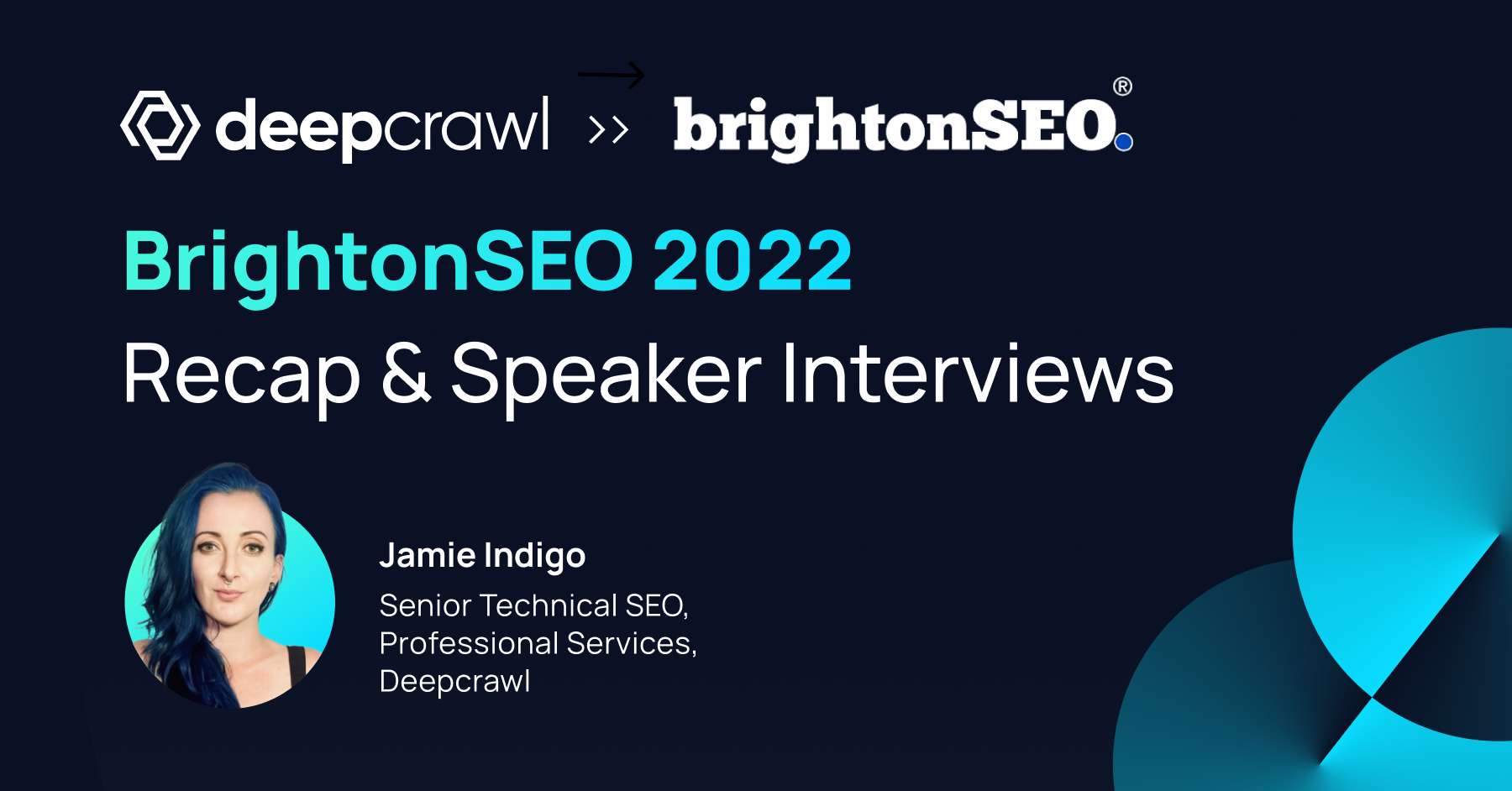 Last week, one of the biggest events in the SEO industry took place in Brighton, England — BrightonSEO!

Deepcrawl’s Jamie Indigo was on the ground at the conference and conducted a series of interviews with first-time speakers at BrightonSEO to learn more about their careers in SEO, what motivated them to begin speaking at industry events, and to dive deep into their conference topics and more. (Over the next few weeks, we’ll be releasing more in this series of interviews—so keep an eye on this space for even more insights from some of the brightest SEOs at work today.)

First up in our series of interviews, Jamie Indigo sat down with Billie Geena Hyde, an SEO evangelist (aka SEO Learning and Development Manager) at Salt Agency and first-time speaker at BrightonSEO, to discuss all things website accessibility, SEO career paths, and why the future of SEO involves being proactive with quality assurance and SEO testing.

Listen to the full interview or read on for the key moments below.

Q: This is your first time speaking at Brighton — how nervous are you?

Billie: It’s my first time speaking in person and at Brighton — my talk’s tomorrow. I’m so nervous, but hopefully, the adrenaline will kick in and I’ll be fine.

Jamie: Oh, it absolutely will and I know you’re going to be a good speaker because you’re nervous — because people who care about things get nervous about them!

Q: What are you going to talk to us about, what are we going to learn in your session?

Billie: So, my talk is called, “Is your site accessible? No? Why the f*ck not!” I will talk about accessibility on different levels. About the people-with-disabilities spectrum and about users whose attention might be elsewhere. We’re talking about accessibility as it affects anyone and everyone. We’ll go on to talk about how you can ensure that your site is accessible, and how you can ensure it meets various government standards and acts and laws.

Q: There is a governmental aspect to this; there’s a requirement to make your site accessible. And there is something to be said about useful terror… do you find most people come to you because they are afraid of legal consequences, or are they more proactive?

Billie: To be honest, I don’t get many people coming to us for accessibility at all; I find it a really hard thing to sell clients on—which really shouldn’t be the case. So my thinking is, give them the numbers, how much money they could potentially make… but I hate having to sell people on accessibility. [It should be a given!]

Q: Tell me about your role at your agency.

Billie: I’ve got a very unique role — I don’t know anyone else who does what I do. I’m the Learning and Development Manager at Salt Agency and my job is basically to talk about SEO. That’s what I’m paid to do.

Billie: I just preach SEO, shout at people, cause chaos everywhere I go…

Jamie: Useful terror! Creative chaos. I am here for it. There’s a lot of need and use for it.

Q: What do you think prompted that role to come into existence? I’ve never met anyone who’s had a role like this before.

Billie: No, neither have I! Well, except for myself at a previous job, but that was a bit more structured. Here, what they wanted to do is close that skills gap that there currently is in the industry, because at the minute it’s so, so hard to find experienced SEOs because other companies already have them and they’re happy and they’re trying to keep them. So my job is to get people excited about SEO and give them experience… and then kinda steal them!

Jamie:  Yeah, cultivate this next generation. Someone asked me, “How did you learn SEO, was it a course? Was it a textbook” I’m like, no, boots on the ground and a prayer in my pocket! I know they have courses in colleges now. So this is a different world, and this cultivation is going to benefit the clients, benefit the end-users — there’s a lot to win on this one, and you get to be an evangelist for it.

Billie: This morning I attended the SEO QA talk — it was fantastic! I think that’s really the next step. It’s the next iteration of SEO — introducing QA. Because that doesn’t happen enough — I’ve worked at previous agencies where there’s been no SEO QA!

Jamie: Yes — how do we build SEO into the smoke and sanity tests? Make that part of testing in lower environments so it can be released out. Otherwise, you’re constantly chasing a ball that’s already in the net. We need to become more proactive and gain advocacy for it.

Q:  Are you looking to bring advocacy for SEO QA testing into the education role that you have?

Billie: One-hundred percent, it’s going to be coming into this education role. I don’t want people to be scrambling to fix things anymore, I want them to be able to say, “Okay, we know we’ve done everything possible [to prevent this]. And if something goes wrong, then we have a need: there’s an education gap.” Sometimes the problem is not SEOs and if we do everything we can to be proactive, then as SEOs, we know we’ve done our job.

Q: What has your journey been like to get to this role?

Billie: I’ve had a really varied career. I started out in content. I used to write bereavement notices for newspapers all around the UK. That’s what I did for nearly three years.

Jamie: That’s quite a turn! How did that lead to SEO — like, “Here lies: Ask Jeeves”?

Billie: What happened was, obviously the newspaper industry’s in decline and has been for years. And everyone in the company got an email from the managing director saying, “If you have any ideas on how we can become more profitable, let us know.” I had a blog at the time and I had gotten into SEO a bit, so I was like, “Okay, I’m going to pitch SEO to this company because I know they don’t do it; our website is horrendous and it just disappears.” And this was for 215 websites around the country. I worked really hard on this presentation and did it for the MD and a group of higher-ups and they were like, “thank you, but no thank you.” I thought, okay, I put a lot of work into this, it’s brilliant, and I really think I’ve got the answer here.” So I handed in my notice that day and I got a job doing in-house SEO for a children’s publishing company.

Jamie: So you went from writing bereavements/obituaries to realizing, “Oh, SEO’s a thing I can do and I have the skillset,” and then doing that for children’s books. That’s a beautiful journey!

Billie: Yeah, and then ended up at an agency! I’ve been purely focused on SEO for 3 years, but SEO has been a part of what I do for about 7 years.

Q: Ideally, where do you see SEO sitting within an organization? Sometimes you find that SEO is under marketing, sometimes in product, or engineering (and sometimes it’s a poor and lonely island where it’s one person going, “help, please!”). Where have you found SEO, organizationally, to be most effective?

Billie: For me, I think SEO should be ingrained — even just the basics — into everyone who has access to make changes to the site. If it’s a website where there’s a lot of quality control, it might even be a person in a call center removing things on a website if someone writes or calls in to report something offensive on a site. They need to understand the basics of SEO to know they’re not messing up some larger scheme.

Basic SEO awareness needs to be everywhere.  SEO blurs the lines so much — it is development, it’s quality assurance, it’s content, it’s marketing. It needs to be encompassed by everyone, but also should be it’s own island to watch what’s happening and stop people from harming it.

Jamie: So there’s a big value in having a dedicated contributor who is assisting and really helping leverage these other teams because we all want to make good things and nobody ever wants to click a ‘doom button’… but when you don’t know it’s a doom button, that’s a pretty easy thing to do.

Q: What is something you hope people walk away from your talk knowing?

Billie: I want them to know whether they’re doing enough to make their site accessible for users with disabilities, and just humanity in general.

Jamie: Human first. You want to create content for real people and not just to rank in a search engine. That’s beautiful and I love that the SEO community is embracing accessibility more and more. Often, if something isn’t “generating money,” then it isn’t being prioritized… when fundamentally, we’re humans first.

Billie: One-hundred percent. Money drives so much and by talking about money and added monetary value, that is how, in the grand scheme of things, we’re going to make changes and get businesses on board and make the internet a better place—eventually.

Jamie: It’s one step at a time. We’re always, every day, trying to make the internet a little better.

For more from Billie Geena Hyde, you can find her on LinkedIn and Twitter, or at billiegeena.co.uk.

For more from Jamie Indigo, find them on Twitter, or check out Deepcrawl’s Professional Services team. 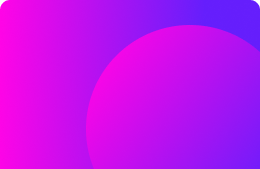 SEO Q&A: “SEO is Not Black Magic” – App Store Optimization & Working With Numbers   This is the fourth…

Deep Insight: Growth expert Luke Carthy on how to build better SEO & conversion strategies   We work with a…