After 18 months of discussion and speculation, Google is in the midst of switching sites over to mobile-first indexing. Despite knowing about mobile-first for some time, the requirements and the implications for search haven’t been all that clear. For this reason we decided to put on a mobile-first indexing webinar with two SEOs at the top of their game.

Bastian Grimm is Director of Organic Search at Peak Ace AG, proud member of the DeepCrawl Customer Advisory Board and an expert when it comes to technical and mobile SEO. In the first part of the webinar Bastian talked us through a variety of issues, implications and discussion points around mobile-first indexing which we’ve summarised here along with a recording of the webinar.

Our moderator-extraordinaire for this webinar is Jon Myers. Jon is DeepCrawl’s Chief Growth Officer and a regular speaker/moderator at conferences worldwide where he imparts pearls of search wisdom from his 19 years of industry experience.

Why all the fuss about mobile-first indexing?

Mobile-first indexing has provided a big challenge for Google and is something new for them. Gary Illyes said at SMX Advanced last year:

“Google never had to swap over an entire index to something new, this is completely new and doing that without experimentation is not possible. And sites should not be hurt, therefore large scale indexing experiments will be conducted.”

Google decided that they needed to test the impacts of this switch very carefully else they would suffer in terms of the quality of the search results.

The desktop index is really quite old, especially the link graph and all the linking signals. Getting these right after switching to mobile-first indexing is really challenging to get right.

“Figuring out for 18-year-old desktop signals: How can this be used for the mobile web? E.g. the link graph/PR is different and totally messed up; how can Google make this work?”

All of the m-dot subdomains don’t have any external inbound link equity or the discussion about the relations with rel canonical and rel alternate. Bastian thinks these factors have all been part of the reasons why mobile-first indexing has taken so long to roll out. Some things are still not working well which is worrying given how long they’ve been working on it.

What are Google doing and why are they doing it?

Mobile-first indexing is about Google preferring and organising cross-device content in a way that can be easily queried from and displayed on a lot of different devices.

This approach makes complete sense when you look at how mobile is dominating the total proportion of searches. 60% of all searches are were non-desktop in August 2016 – this is likely higher now.

Sometimes the mobile search results don’t even include any organic results e.g. ‘Game of Thrones’ after the new season is released. Google are looking at the query and trying to work out what the user is looking for, which may not include organic results.

From desktop to mobile

In the future, your rankings will be based on your mobile site entirely. For some sites this is already happening now.

In the past, Google took the desktop markup and did all rankings and calculations based on those parameters, with some small differences for mobile.

It wasn’t much of a surprise when Google announced the shift mobile-first indexing in November 2016. However, it didn’t seem like they were clear on how they were going to execute it as there were contradicting comments coming from people at Google.

What do we know?

Google’s Paul Haahr confirmed once and for all that there would still be one single index (conceptually multiple indices doesn’t make sense for mobile vs. desktop), the only difference being that post-first indexing they will be crawling mobile pages instead of desktop pages.

.@BermanHale The blog post is pretty clear: “our search index will continue to be a single index of websites and apps.”

But what about desktop-only sites?

There are many sites that only work on desktop (e.g. B2B and sites in more traditional sectors). For these sites the only difference you will see is at some point when you look at the log files the crawling volume from mobile user agents will spike and the desktop Googlebot will decrease.

Google will still be able to crawl desktop-only sites, just with a mobile crawler. However, this is not an excuse not to have a proper mobile user experience.

Can I use accordion and hidden tabs?

These are very common elements that form part of a mobile experience on a site. As long as the content is present in the page’s markup then this isn’t a problem after the site is switched to mobile-first indexing. Gary Illyes has confirmed that “hidden content is not valued less on a mobile site.”

As Google is now taking the mobile version of a site and ranking you based on that then you need to ensure that there is nothing missing on the mobile version compared to the desktop version – else you are in danger of losing rankings.

Parity isn’t only important with regards to content but also tech parity. Schema, for example, needs to be implemented on both mobile, as well as desktop. Parity is crucial!

Early on Bastian saw some strange stuff on a client site. A mobile subdomain started to rank for desktop queries despite not much changing in the previous 3 years. Eventually the mobile site stopped ranking for desktop queries but shows how Google was testing things out even back in November 2016.

At the end of 2017 Gary said webmasters wouldn’t be notified when a site would be switched to mobile-first indexing, but thankfully someone listened to the SEO community and they are now sending out notifications in Search Console.

What is “mobile” anyway?

Often Bastian’s clients get confused by what constitutes mobile. Is it defined by resolution or device?

There are a couple of considerations. Make sure search engine bots can access the mobile version of your site, especially any JavaScript. 93.7% sites now have some form of JavaScript and this is ultimately why Google started to render sites as well as crawling them. Google don’t want to miss any modifications to the output (content) made using JavaScript. By only crawling a page without rendering it, Google would miss that content.

Bastian said that view source is dead. It is a useless part of an audit if a site is JavaScript-heavy and uses any JS frameworks. The crawler would only see what is displayed in the source code (not much). You need to be able to see the rendered DOM.

Check out Bartosz’ research into crawlability and indexability of JavaScript and how Google is able to handle different frameworks.

Google uses a 1024×768 resolution, which is pretty small by today’s standards and not very sophisticated. If you have a responsive site this is important because you need to watch your responsive breakpoints, portrait vs. landscape, when to show the burger menu etc. as everything that’s important to you needs to be rendered properly.

Fetch and render is limited to 10,000 pixels in height and will be cut off after this point. This is worth keeping in mind for long pages as they won’t be rendered after 10,000 pixels.

Client example: Site was working well and content was updated with more content being added to the page. The rendering was destroyed and this was because the site was being cut off after 10,000 pixels. Once the full page could be rendered the rankings returned to normal quite quickly.

Google is using Chrome 41 (really old), so what you see in Chrome is different from what Googlebot sees. You can run Chrome 41 and then use the dev console in there to see if the site is throwing up any additional errors.

Bonus tip: You can render any given page by using a 100% iFrame in Fetch as Google in Search Console, unless the site has a header which blocks this.

The average consumer has five devices and different devices are used during their journey. 90% of consumers start a task on one device and end on another.

Responsive is the best solution from an SEO perspective because you can design different way of showing different content per resolution (device). Design for the smallest viewport first, then work your way up. Also consider landscape vs. portrait for mobile devices when people switch their view.

Some points on optimising sites with responsive design:

Pagespeed (load time) is a ranking factor – now also on mobile. Google keeps pushing for faster sites. It makes sense to get it right – you don’t want to be assigned with a ‘slow to load’ tag in search.

However, don’t forget desktop, both are relevant. SEOs have a tendency to get carried away with popular trends.

10 tips for preparing for mobile-first indexing:

1. Understand your mobile setup
Dynamic is hardest to get right because you have the same URL that does different things – it’s easy to get wrong. All set ups should be the same in terms of ranking after the switch but you need to ensure there is parity which is harder work on a separate mobile site and easiest with responsive design.

2. Are you targeting the right keywords on mobile?
Understand if the split, intent and volumes are the same and ADAPT.

4. Don’t prevent access through use of interstitials.
Google stated this can be problematic, so ensure interstitials and ads aren’t negatively impacting your sites.

5. Did you check all GSC reports properly?
Search Console has loads of useful report e.g. the mobile usability report.

6. Check GSC fetch & render for mobile as well
Test the mobile version of your site as well as the desktop version.

7. Do a full site health check and focus on mobile issues
You can use DeepCrawl’s mobile reports including configuration mismatches, which will show relations that are missing. It’s important to do this at scale by crawling the whole of your site.

9. Get all the content that you want to rank for onto your mobile site
Is your schema.org markup available on mobile; indexation rules, canonical tags, etc.

You can find all of Bastian’s slides here:

Welcome to a new reality – DeepCrawl Webinar 2018 from Bastian Grimm

Complete your understanding with our mobile-first indexing whitepaper

Have you read our comprehensive white paper on mobile first indexing, covering everything you need to know about Google’s big update?

You submitted so many great questions to Bastian and Jon in this webinar that we had to put them into their own separate post! Due to the sheer number of them, we also asked Bastian a few bonus questions after the webinar ended so we could share as many of his answers with you as possible.

Be sure to read our post on the mobile Q&A with Bastian which covers the second half of the webinar.

Ask the Expert: Kevin Indig Answers Your Internal Linking Questions For our first DeepCrawl webinar of 2019, we were joined… 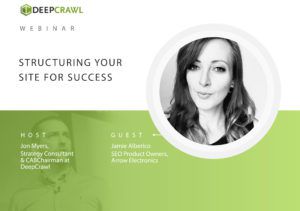 Webinar Recap: Structuring Your Site For Success With Jamie Alberico & Jon Myers For October’s edition of the DeepCrawl webinar…

The New Era of SEO Automation: Bridging the gap between marketing and engineering

The New Era of SEO Automation: Bridging the gap between marketing and engineering SEOs increasingly have their place at the…